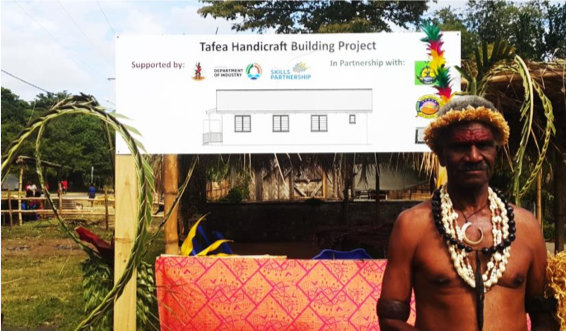 Today’s article is a brief reflection on my recent discussion with a prominent traditional leader, Chief Willie Lop, President of the Nikoletan Council of Chiefs (NCC). Focus is on the subject of development and how he has played a key role in bringing development to his home island and to his province.

It was just past mid-day on Wednesday 1st of September. The signing ceremony was over. The VIPs and other officials had left. I grabbed the golden opportunity sitting there with the high ranking chief to have a chat with this great southern leader, Chief Lop.

I asked him why Tanna has made it look so ‘easy’ compared to the rest of us when it comes to development, mindful of the fact that land issues affect the entire country from the northernmost islet of Hiu to the southernmost island of Aneitym.

Surely it couldn’t be the issue of money, donor support or a lack of resources. But perhaps culture, the envy, jealousies, and all other excuses that keep undermining, thwarting and blocking development?

An Hour with Nikoletan’s President

The papers just signed were for the TAFEA Handicrats Centre building. Under Chief Lop’s leadership the NCC agreed to provide the land to accommodate the project. Not that this is the first-of-its-kind project in Vanuatu, but the story behind the access to the land is what made the discussion very interesting and worth telling. A story enshrouded by respect, understanding, the spirit of surrender, and a true vision for development. The chief stood in defense of the project, and brokered the deal.

On the evening of Tuesday 31st August the negotiation was intense between eight land claimants. Three claimants had lost their previous bid, I was told. But in his deep wisdom Chief Lop accommodated them anyway. He chaired the somewhat heated discussion. The chief upheld a vision for the future. He painted for the claimants a colourful future when this project, once completed, would throw open vast opportunities for Tafean mothers (including the claimants’ very own families) to gain accesss to a great avenue to generate incomes for their people and for the children of Tanna and of TAFEA province as a whole. That’s what he envisioned and that’s exactly what he put before the restless claimants.

When the last rays of Tanauta’s sun hit Lenakel’s horizon that evening, the claimants laid down their arms of conflict, anger, resentment, and selfishness. They surrendered, apologised to their cultural chiefly Captain and to each other, then sealed their consent with kava in the traditional ‘tamafa’ way, and settled peace. They were now ready for this important development. Ready to celebrate.

Wednesday 1st of September was a brand new day. The Agreement was signed and sealed followed by a delicious ‘slow food’ lunch (which I also enjoyed) ready for construction to commence. How hard is that? Talking about kava, our northern provinces (largely PENAMA) are the homes of kava in the world. But culturally the Tannese have apparently made far better use of the plant than us with our vast plantations and boasted commercial leadership in the product.

The positive aspects of Tannese culture such as respect for chiefly authority that help to uphold fruitful developments such as the handicrafts project in the story told above is worth our emulating. Go to Lenakel and see for yourself the evidence of their hunger, thirst and quest for development, while the rest of us still walk around with namele leaves and stones in our hands to destroy development.

In my 20 years of travels in and out of Tanna, I have seen not one namele leaf stuck beside a project. Do they have conflicts over land and other social issues? Oh yes they do. But when it comes to important development projects such as a handicraft centre (as colourfully opened in early September), roads, wharfs, schools and dispensaries, they deal with these along cultural lines. They allow development to continue and manage their conflicts unobtrusively in the background. Of course they’ve had their share of fires and open conflicts but on the whole they’ve done tremendously far better and have been able to manage their conflicts far more diplomatically than us northerners.

The National Sustainable Development Plan (‘The People’s Plan’ 2016 to 2030) is a colourful masterpiece of words on paper put together by various local experts with some external support. It was designed to be the chief policy document for our country by our leaders to take us over a 15 year period till 2030. That’s great. How much of it has been implemented is in the hands of the mid-term review team (if there is one). But on the whole, ‘The People’s Plan’ will remain just words on paper if our approaches to development are hampered by the very negative aspects of our cultures and attitudes. The amount of aid we pour into projects have and can go to waste because of this too.

Last September PENAMA Province celebrated its Silver Jubilee. I wrote two articles after the celebrations then highlighting administrative and other challenges within the province. A year later I present this article on ‘culture and development’ to help us rethink our development efforts. The recent story of the broken Cooperatives building glass window at Lolowai reflects a very shameful reaction on the heels of a very important COM meeting at the Saratamata provincial HQ.

Do we value development for development’s worth or are we still deeply fragmented in our efforts? The political and cultural values we hold within the province, are they still relevant or have we missed the boat and been spending more time running after shadows? We are not thinking correctly.

I wrote this article with a genuine thought in mind, and that is, that we can do things better in Penama and other northern provinces as they do on Tanna when it comes to development. We can if we will.

Prior to borders being closed due to the global pandemic, a lot of officials used to travel to other countries in Asia (Singapore, Malaysia, etc) as part of our so-called ‘South-South Cooperation’ to learn from them on how they have progressed in their development efforts out there with the hope of bringing back valuable lessons to advance our own respective institutions and our country.

Why can’t we do the same here in Vanuatu under some sort of a North-South Cooperation set up for our northern chiefs and other provincial leaders to learn from Tanna how they deal with issues relating to development? No doubt the Malvatumauri Council of Chiefs may be too glad to help facilitate that kind of a process, and undoubtedly Chief Lop and his people may be quite happy to accommodate.

If we are truly already 40, this kind of an approach to development should help to bolster and strengthen our development pathways. Remember, international development support will be phased out over the next few years under our DC status.

The time for us to get our acts together is now.