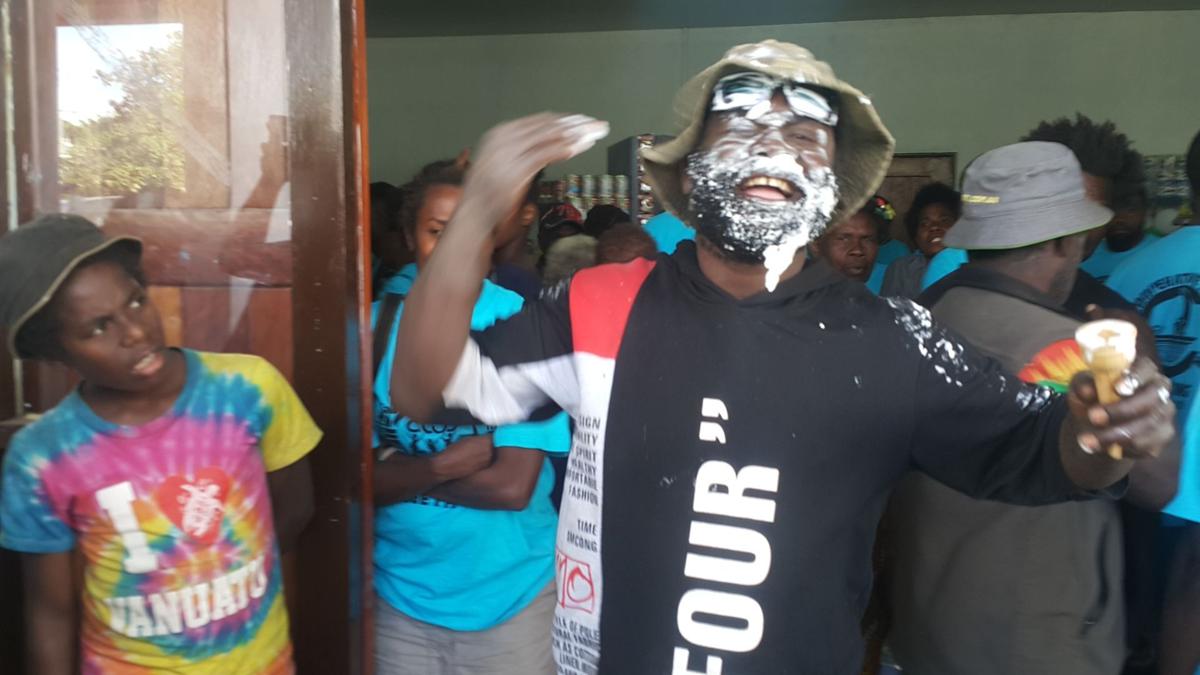 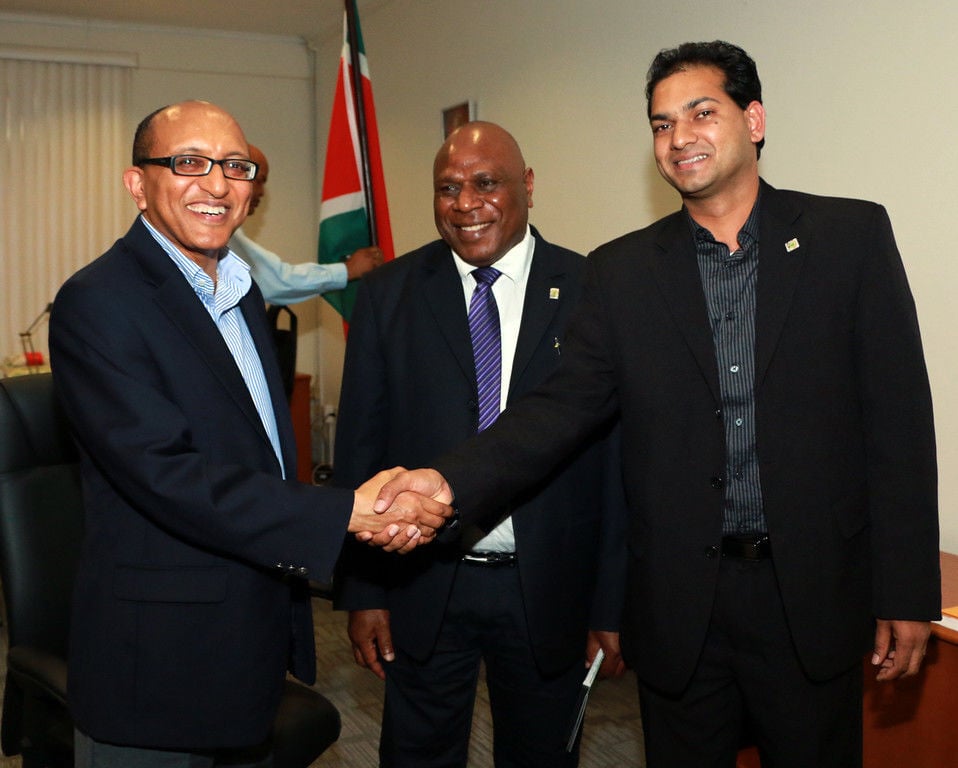 The bewildered primary school kid standing immediately next to him had to take a second, very puzzled look at the guy with the ice-cream to ensure the latter hadn’t lost his mind and that he wasn’t mad? He literally painted ice-cream all over his face, nose and beard as he danced away to the tune of the veteran Noisy Boys’ String Band that entertained the crowd.

This hilarious sight happened on the occasion of the reopening of the TAFEA Coop during the 2nd National Week of Agriculture (NWA) in Blackman Town, Lenakel on the warm and beautiful afternoon of Thursday 2nd of September. Even if the young man, like the rest of us, wasn’t given the opportunity to share his sentiments in one of those speeches that afternoon, his reaction definitely stole the show at the event and captured the attention of the crowd and hundreds/thousands more on social media that evening.

Was the 2nd NWA just another Event?

No it wasn’t. For 18 long months since March 2020 we’ve been ruthlessly tortured both mentally and economically by the global pandemic. With hotels/resorts closed, bungalows barely surviving from our ‘Sapotem Lokol Turisim…Mi Tumoro’ marketing strategy, our economic environment has generally been very bleak. The social impact has been terribly immense with hundreds of previously secure and permanent jobs literally wiped out. Morale has been left at rock bottom and direly very low.

Albeit the hiccups and challenges the organising team encountered leading up to and during the event, the 2nd edition of the NWA was a major social and economic development confidence booster for our farmers, the Government, the private sector, NGOs and other stakeholders and partners. I sat in the ATR-72 return-home-flight next to the Head of a major development partner organisation who had also attended the event. The reflections and sentiments surrounding NWA on that half-hour flight home were very positive.

Impacts: livestock was sold out by Day 2, Forestry distributed 10,000 mahogany plants, the first of seven (7) tractors handed over, sale of hundreds of processed items, artefacts and root crops, launching of a brand new variety of resilient yam, the launching of various other fish, agricultural and forestry projects, a business matching event between processors and farmers, launching of several cooperatives, an export facility showcase, cooking demos using value added products, launching of brand new Vanuatu-made e-commerce platform, and much more. One of the major highlights of the NWA was the reopening of the once-very-popular TAFEA Coop.

Yes, in the sense that we’re moving in the right direction in mechanising agriculture as we started off back in 2014/2015 with those initial 25 rotovators from Indonesia. Yes, in the sense that we are far more united now than before, thus a great motivating factor to spur swift advancements. Yes also in the sense that we now have institutions such as the Vanuatu Cooperatives Business Network (VCBN) and the Vanuatu Primary Producers Authority (VPPA) which are equipped with human, financial and technological resources. These institutions are now facilitating data collection/analysis to inform evidence-based policy decisions and linkages to agricultural/feeder roads, production quantities and varieties, geographical locations, and eventually the market pathways to bring our products to the domestic and more so the regional and international export markets. Our level of ‘readiness’ though continues to be challenged by 5 key demands we need to address in order to move forward.

Agriculture and Trade in Vanuatu face five ongoing major demand challenges: 1) household consumption, 2) intensive cultural commitments, 3) domestic market, 4) disaster-time food security, and 5) overseas exports. These are real life issues which we need to strategically account for. Item #5 – overseas exports – is of particular interest given the glut we have faced over the years with certain products: ginger immediately post-independence, and lately pineapples and taro, to name a couple.

Key question to ask ourselves is, are we actually producing what the market wants or are we still planting and growing any taro, any pineapple and any coconut hoping that the market would somehow fetch it and in the form we think the market wants? Trade doesn’t happen that way. As the French saying goes, ‘Le Client et Roi’ (‘The Customer is king.’) Not just that but to ensure we are producing consistent supplies.

Prior to the commencement of NWA I had a long conversation with the CEO of VPPA and a similar session after the NWA with the General Manager of the VCBN, Mr Jack Loughman on these issues in order to help us better prepare for the 2022 production, harvest and marketing seasons. The Trade and Agriculture Ministries need to coordinate efforts more efficiently, effectively and systematically than they may have thus far done. They drive policy. They must lead! The Government has invested in their sectors to deliver.

Despite these remaining challenges, I believe we’re almost there. In a matter of 7 years we’ve shifted gear.

From CWA to PWA to NWA

Over lunch on Monday, 6th of October 2014 at the 13th Caribbean Week of Agriculture (CWA) my then Minister David Tosul asked me if we (meaning the Ministry of Agriculture and Vanuatu for that matter) can host an event similar to the CWA? Out of respect and protocol (you never say ‘No’ to a State Minister if his request is in order and not illegal) I said ‘Yes’ (though I was tempted to say ‘No’). Later that day he met with the Director of the EU/ACP CTA Mr Hailu and the Republic of Suriname’s Minister of Agriculture Soeresh Algoa. This was the seminal meeting that paved the way for a Pacific Week of Agriculture (PWA which Vanuatu hosted in 2017). The route to this combined Agriculture/Trade event was initially showcased in the Agritourism Festival held at Tagabe in Nov 2016. From an idea to a concept, the NWA was born, out of that stressful lunch in Paramaribo, Suriname almost 7 years ago. Congratulations to the MALFFB/MTTICNBV Alliance and the support of all our other Government departments, Development Partners, farmers and other stakeholders for making the 2nd NWA a resounding success on many fronts.

Long live the NWA. Congratulations MALAMPA for your commitment to host the 3rd NWA. Meanwhile, we need to work much harder and smarter in addressing the 5 key demand challenges highlighted above.