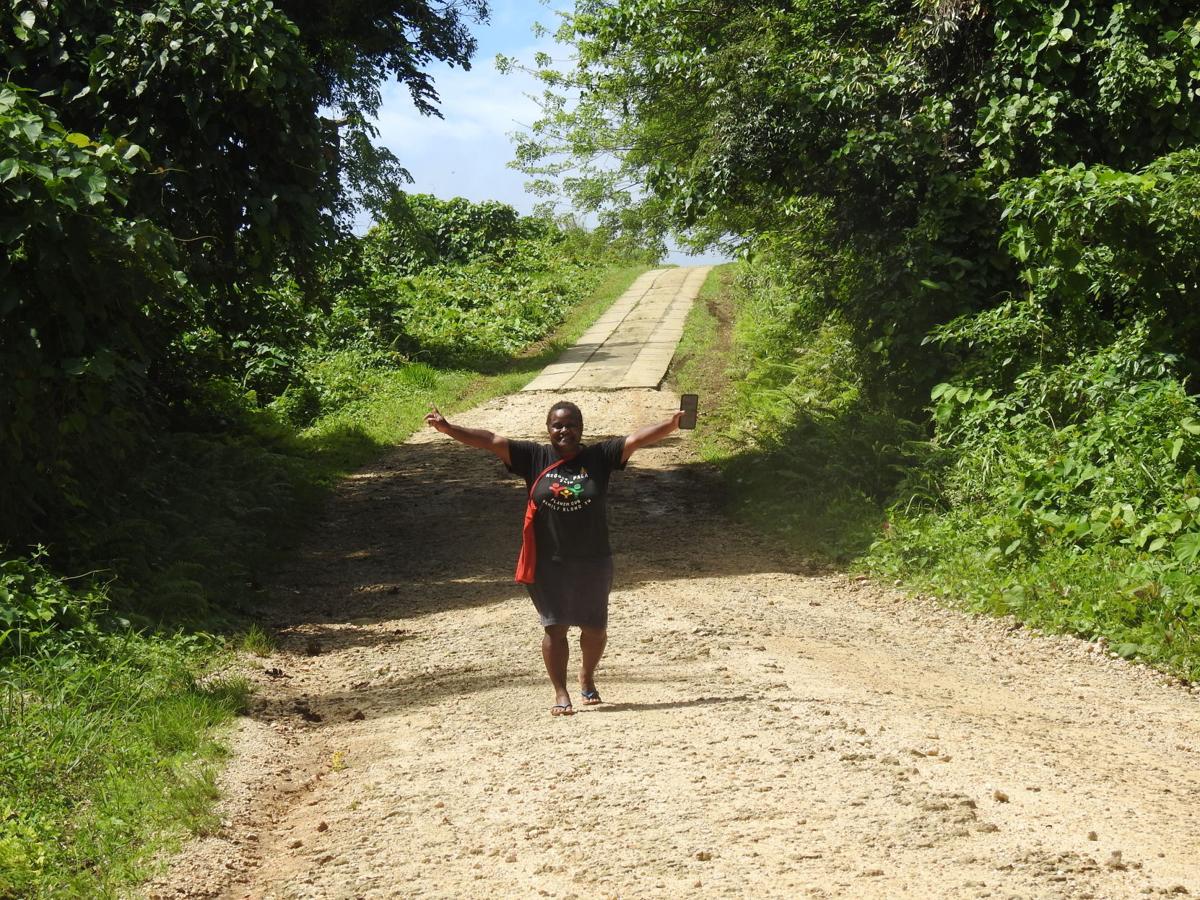 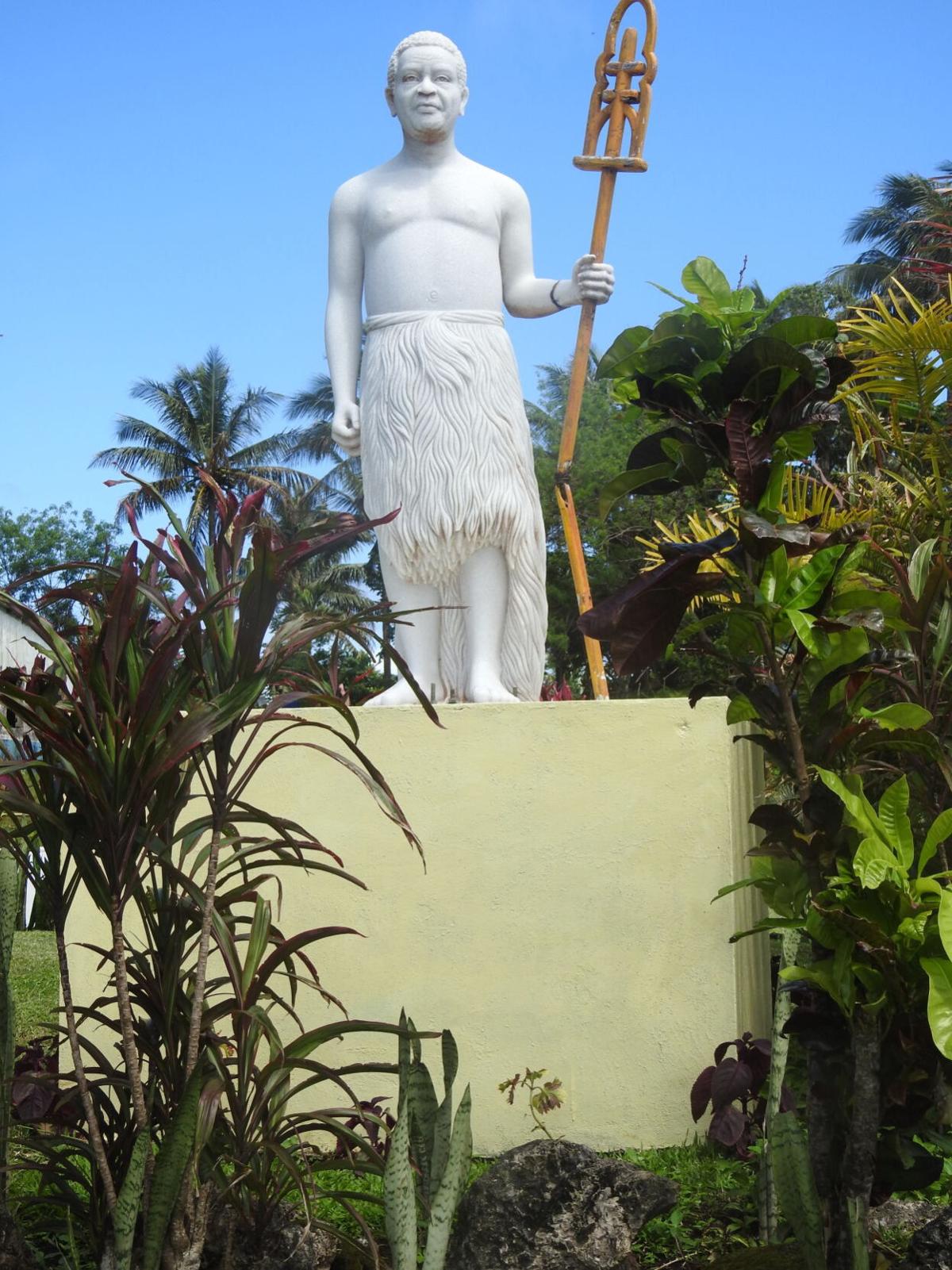 This is about the longest highway on Pentecost- not a street, from Point Cross in the South to Nazareth in the North, which would definitely turn the long island into the next Tanna Island, as soon as it is enlarged and tar sealed. In my mind’s eye, I can already see a Tanna-like highway snaking its way throughout the green island.

The signs of the island’s pulsating economic heart beat speak for themselves through their roadside markets and muddy 4WD vehicles that brave the snaking limestone gravel road, along the summit of the almost mountainous terrain which vanishes into deep precarious crossings, only to reappear on the horizon ahead.

Ifira’s Road Construction Company did a brilliant job to shatter the island’s virgin bush to open the first road where morning mist hangs just above the grass to envelope your vision on rainy days.

Unbridged rivers and rippling streams which look so refreshing on a hot day, are a part of the landscape. New comers would do everything to stop and take a dip while for ‘man Raga’, it’s nothing special.

Imagine how drivers buy all the bundles of dry coconuts along the roadside markets towards Pangi in Central Pentecost to resell to communities in the East along the “big sea” whose plantations had been devastated by Cyclone Harold. “This is not about making money but providing a service to others to help them add taste to their meals with coconut milk”, my driver Sam shrugs.

He invites me and my colleagues for lunch underneath the cool verandah of his house and reminds us to buy “some tins for your rice”. We stop in front of a big shop to buy our supplies on the seashore where the MV Saravenua has dropped anchor to unload cargo for the local businesses.

We sit down for lunch and our driver turns and throws open the door of his own store which is linked to his concrete home and impresses us with its packed interior. “Why didn’t you tell us that you have a shop so that we could buy from you?”, we ask very impressed. He replies that he did not want to be mistaken to be forcing us to spend in his store.

My point is that when you meet a ‘man Raga’ in flip flops, worn-out t-shirt and unkempt hair, never draw your conclusion on his looks since still waters run deep. This is where I see a similarity between ‘man Raga’ and ‘man Tanna’. They both work hard to earn money and they both know how to save it.

Just behind Lonorore Airport, CCECC is building its base with rows of Chinese buildings and construction equipment in an enclosed area, to prepare for the construction of a modern road.

Indeed, Pentecost is made of limestone, the very resource needed for the project. Several quarries are already in operation on the road at Bwatnapni.

My driver who is also a driver for the ‘big boss’ of CCECC says he has a special relationship with the Chinese. “I drove the big boss from the airport once and he hired me to work for the company. He now calls me “smol brata’. The company asked me to pick up the names of drivers for them to be interviewed to drive for CCECC”, he says.

“The company tested me on their vehicles and I managed to drive most of them. In the rain they look for me to drive their vehicles across the flooded rivers. I don’t drink kava, alcohol or smoke”.

Another advantage of Pentecost is its large population on the island. I am surprised by the fact that people live throughout the island even in the interior like on Tanna, including on the summit of the high lands. This explains why I am convinced that like the Tannese, all that they need is a tar sealed road and they will begin to arrive to build their homes on the sides of the road to enable their businesses to flourish. The vital key they currently lack to their prosperity is a modern tar sealed road.

After arriving in North Pentecost, every morning I sit at the verandah of Tamata Guest House below Sara Airport, to observe families and individuals walk past on the main road, on their way to their gardens, sun or rain. I smile and say, “Rani!” in the morning and “Bongi” in the evening, when they return home heavy laden with baskets and bags of fresh produce and firewood and dry coconut leaves to start the fire.

Just recently, one particular high chief walked past on election evening with a sizable freshly harvested kava on his shoulder. The serious look on his face seemed to show he might have already learned the unofficial results that the ‘namba tree’ of North Pentecost has fallen. His wife had a basket filled with agricultural produce on her back. The chief did not look my way even though he and I agreed a day earlier for me to interview him that afternoon.

My guess was that he was on his way to the nakamal of the just failed candidate Ham Lini. I was right. He had a duty to call on his high chief at this difficult time. “I assured him that he has not failed his people but rather, he has made history by daring to cross over to contest the by election on an independent ticket. This is the dawn of a new beginning which will be explored in the future”, he tells me he told him during kava. This is chiefly protocol.

The unspoken truth about the long island is that the Almighty God has blessed ‘Raga’ with regular rain to render the island its forever green landscape. This explains why farmers farm the entire island even in the high hills. Pentecost is fertile!

One thing that strikes me as a new comer to the island, is that most former students who went to school with me at Vureas High School on Ambae in the 1960s and 70s, were almost all from North Pentecost though I met one in the Central.

To cut a long story short, most of the island’s university graduates of the era, intellectuals and technocrats and political practitioners including the late Father Walter Lini, seemed to hail from the Northern end too. As the Northern tip is called Nazareth like the home town of Jesus in the Bible, then who am I to question their brilliance?