You have permission to edit this article.
Edit
Home
News
Business News
Opinion
Sports
Tourism
Jobs
Real Estate
Classifieds
Advertise With Us
1 of 7 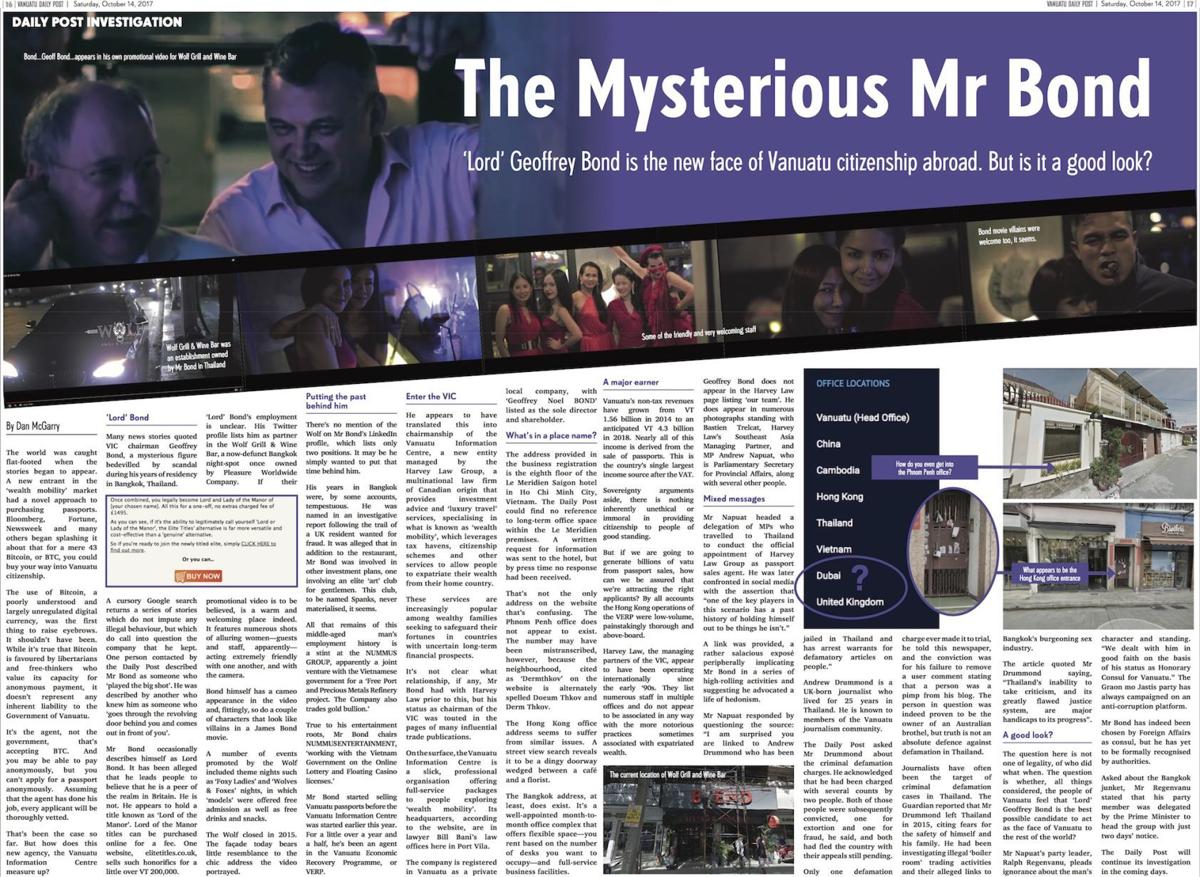 Our weekend feature on questions concerning the Vanuatu Information Centre. 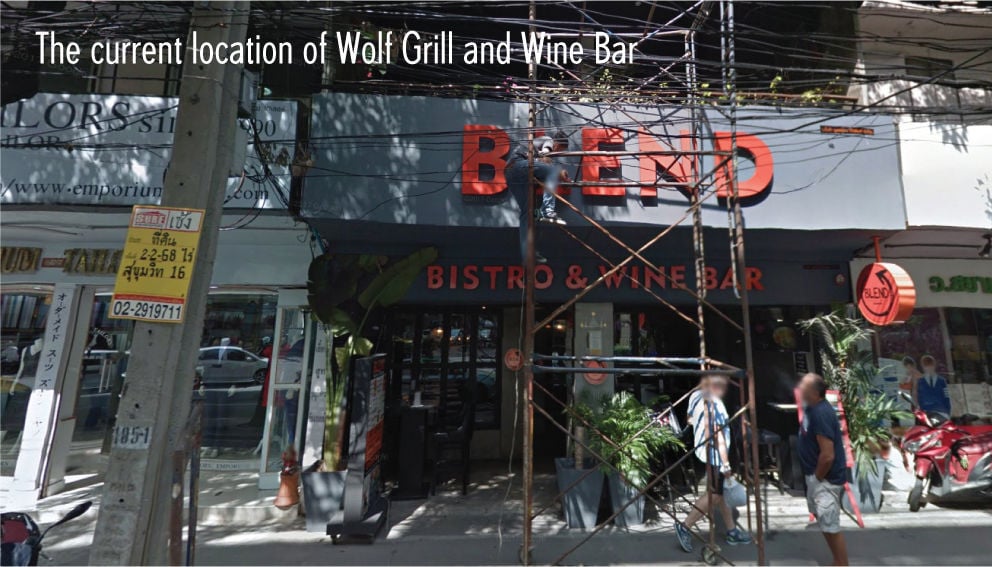 The Wolf Grill & Wine Bar closed down in 2015. It no longer resembles the tony establishment the promotional video made it out to be. 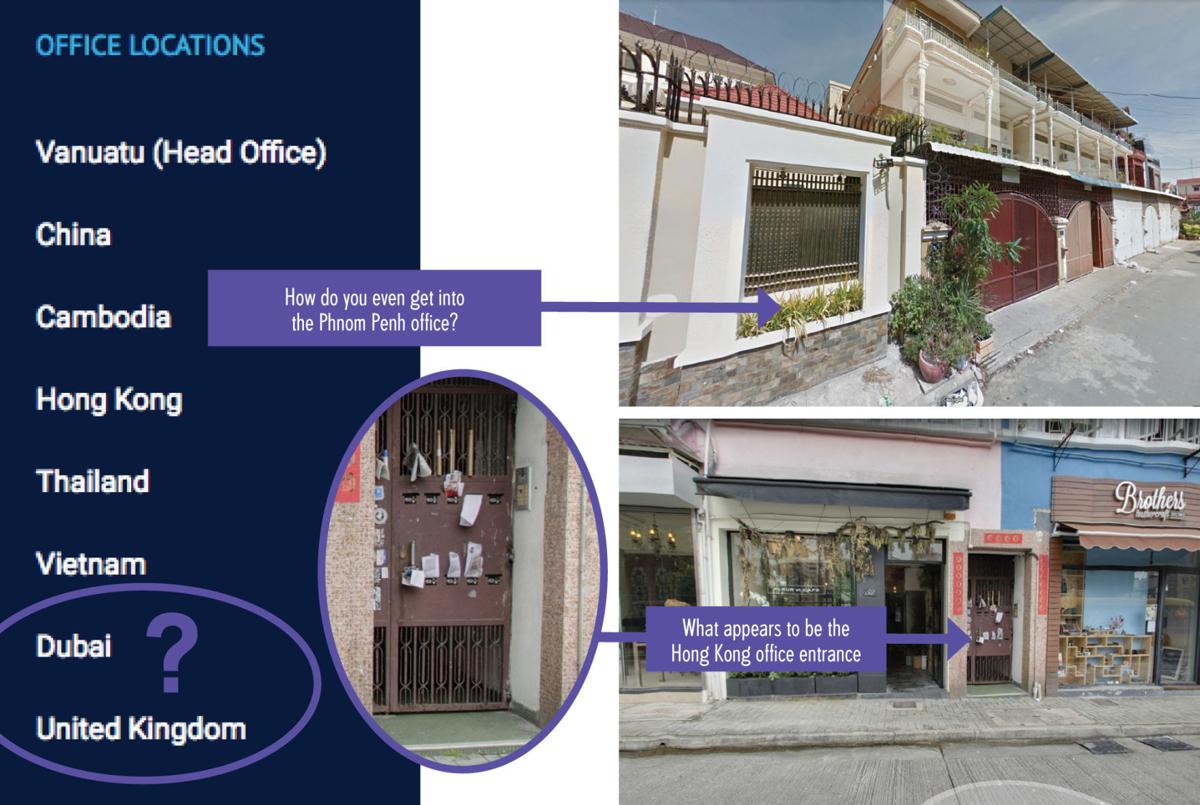 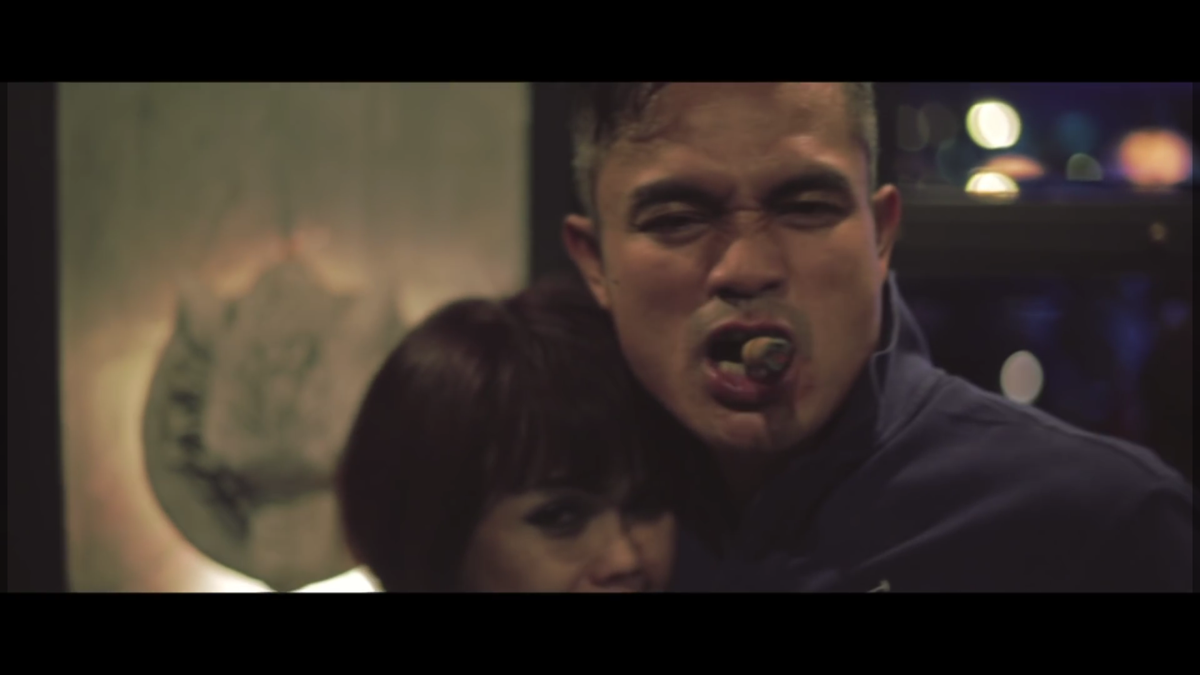 Bond Movie villains were welcome at the Wolf, it seems. 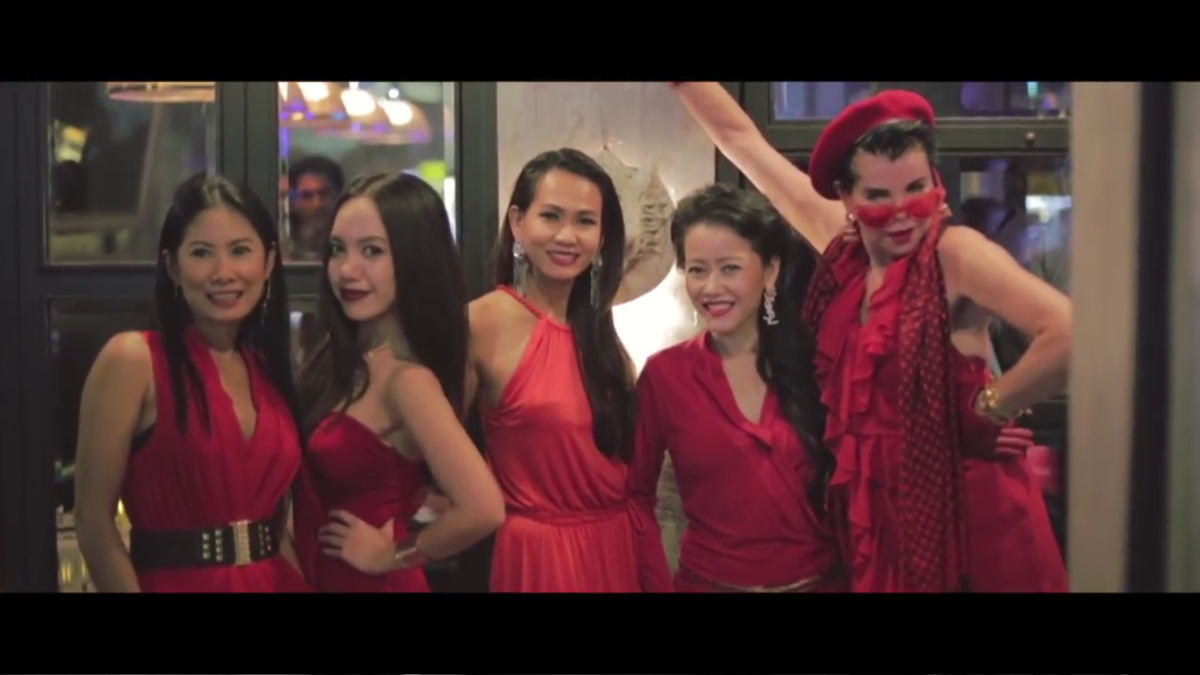 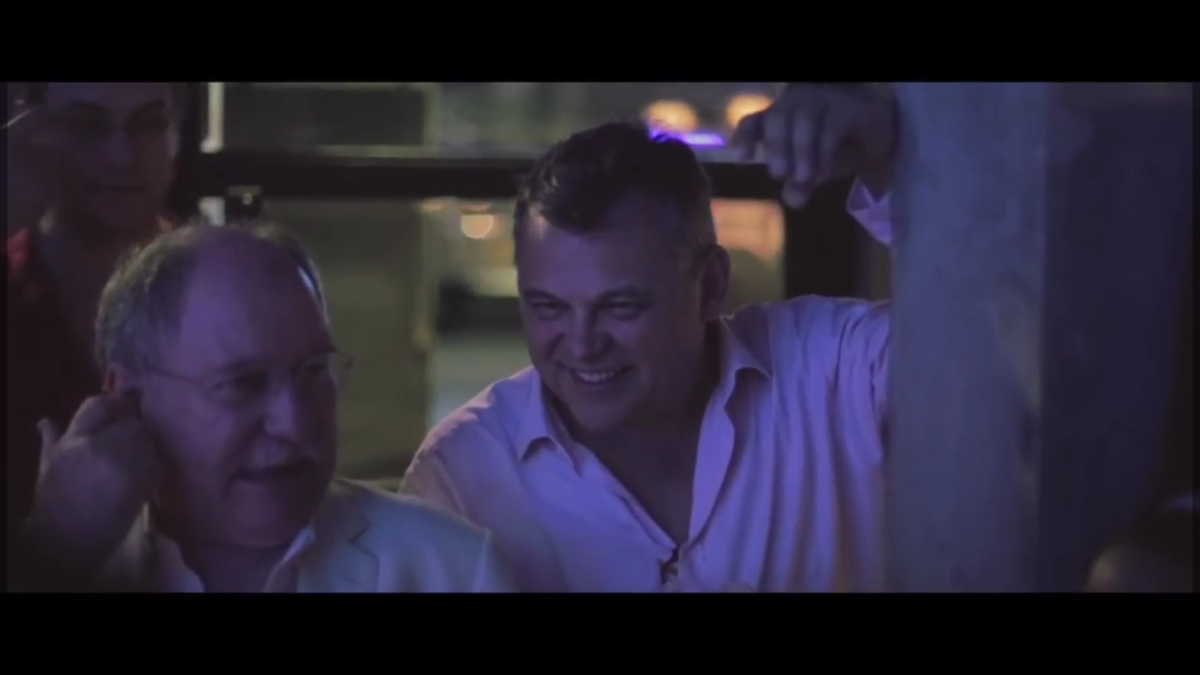 Bond... Geoff Bond in his own promotional video for the Wolf Grill & Wine Bar 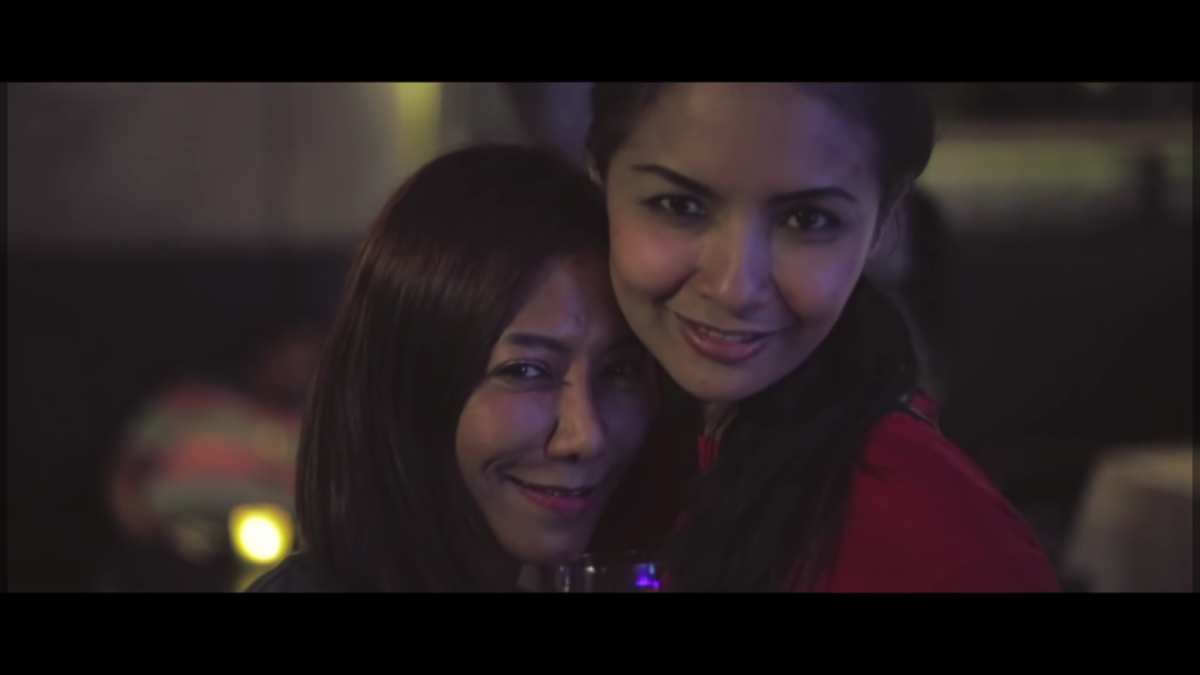 Our weekend feature on questions concerning the Vanuatu Information Centre.

The Wolf Grill & Wine Bar closed down in 2015. It no longer resembles the tony establishment the promotional video made it out to be.

Bond Movie villains were welcome at the Wolf, it seems.

Bond... Geoff Bond in his own promotional video for the Wolf Grill & Wine Bar

‘Lord’ Geoffrey Bond is the new face of Vanuatu citizenship abroad. But is it a good look?

The world was caught flat-footed when the stories began to appear. A new entrant in the ‘wealth mobility’ market had a novel approach to purchasing passports. Bloomberg, Fortune, Newsweek and many others began splashing it about that for a mere 43 Bitcoin, or BTC, you could buy your way into Vanuatu citizenship.

The use of Bitcoin, a poorly understood and largely unregulated digital currency, was the first thing to raise eyebrows. It shouldn’t have been. While it’s true that Bitcoin is favoured by libertarians and free-thinkers who value its capacity for anonymous payment, it doesn’t represent any inherent liability to the Government of Vanuatu.

It’s the agent, not the government, that’s accepting BTC. And you may be able to pay anonymously, but you can’t apply for a passport anonymously. Assuming that the agent has done his job, every applicant will be thoroughly vetted.

That’s been the case so far. But how does this new agency, the Vanuatu Information Centre measure up?

Many news stories quoted VIC chairman Geoffrey Bond, a mysterious figure bedevilled by scandal during his years of residency in Bangkok, Thailand.

A cursory Google search returns a series of stories which do not impute any illegal behaviour, but which do call into question the company that he kept. One person contacted by the Daily Post described Mr Bond as someone who ‘played the big shot’. He was described by another who knew him as someone who ‘goes through the revolving door behind you and comes out in front of you’.

Mr Bond occasionally describes himself as Lord Bond. It has been alleged that he leads people to believe that he is a peer of the realm in Britain. He is not. He appears to hold a title known as ‘Lord of the Manor’. Lord of the Manor titles can be purchased online for a fee. One website, elitetitles.co.uk, sells such honorifics for a little over VT 200,000.

‘Lord’ Bond’s employment is unclear. His Twitter profile lists him as partner in the Wolf Grill & Wine Bar, a now-defunct Bangkok night-spot once owned by Pleasure Worldwide Company. If their promotional video is to be believed, is a warm and welcoming place indeed. It features numerous shots of alluring women—guests and staff, apparently—acting extremely friendly with one another, and with the camera.

Bond himself has a cameo appearance in the video and, fittingly, so do a couple of characters that look like villains in a James Bond movie.

A number of events promoted by the Wolf included theme nights such as ‘Foxy Ladies’ and ‘Wolves & Foxes’ nights, in which ‘models’ were offered free admission as well as free drinks and snacks.

The Wolf closed in 2015. The façade today bears little resemblance to the chic address the video portrayed.

Putting the past behind him

There’s no mention of the Wolf on Mr Bond’s LinkedIn profile, which lists only two positions. It may be he simply wanted to put that time behind him.

His years in Bangkok were, by some accounts, tempestuous. He was named in an investigative report following the trail of a UK resident wanted for fraud. It was alleged that in addition to the restaurant, Mr Bond was involved in other investment plans, one involving an elite ‘art’ club for gentlemen. This club, to be named Spanks, never materialised, it seems.

All that remains of this middle-aged man’s employment history is a stint at the NUMMUS GROUP, apparently a joint venture with the Vietnamese government for a ‘Free Port and Precious Metals Refinery project. The Company also trades gold bullion.

’True to his entertainment roots, Mr Bond chairs NUMMUS ENTERTAINMENT, ‘working with the Vietnam Government on the Online Lottery and Floating Casino licenses.’

Mr Bond started selling Vanuatu passports before the Vanuatu Information Centre was started earlier this year. For a little over a year and a half, he’s been an agent in the Vanuatu Economic Recovery Programme, or VERP.

He appears to have translated this into chairmanship of the Vanuatu Information Centre, a new entity managed by the Harvey Law Group, a multinational law firm of Canadian origin that provides investment advice and ‘luxury travel’ services, specialising in what is known as ‘wealth mobility’, which leverages tax havens, citizenship schemes and other services to allow people to expatriate their wealth from their home country.

These services are increasingly popular among wealthy families seeking to safeguard their fortunes in countries with uncertain long-term financial prospects.

It’s not clear what relationship, if any, Mr Bond had with Harvey Law prior to this, but his status as chairman of the VIC was touted in the pages of many influential trade publications.

On the surface, the Vanuatu Information Centre is a slick, professional organisation offering full-service packages to people exploring ‘wealth mobility’. Its headquarters, according to the website, are in lawyer Bill Bani’s law offices here in Port Vila.

The company is registered in Vanuatu as a private local company, with ‘Geoffrey Noel BOND’ listed as the sole director and shareholder.

What’s in a place name?

The address provided in the business registration is the eighth floor of the Le Meridien Saigon hotel in Ho Chi Minh City, Vietnam. The Daily Post could find no reference to long-term office space within the Le Meridien premises. A written request for information was sent to the hotel, but by press time no response had been received.

That’s not the only address on the website that’s confusing. The Phnom Penh office does not appear to exist. The number may have been mistranscribed, however, because the neighbourhood, cited as ‘Dermthkov’ on the website is alternately spelled Doeum Thkov and Derm Thkov.

The Hong Kong office address seems to suffer from similar issues. A street view search reveals it to be a dingy doorway wedged between a café and a florist.

The Bangkok address, at least, does exist. It’s a well-appointed month-to-month office complex that offers flexible space—you rent based on the number of desks you want to occupy—and full-service business facilities.

Vanuatu’s non-tax revenues have grown from VT 1.56 billion in 2014 to an anticipated VT 4.3 billion in 2018. Nearly all of this income is derived from the sale of passports. This is the country’s single largest income source after the VAT.

Sovereignty arguments aside, there is nothing inherently unethical or immoral in providing citizenship to people of good standing.

But if we are going to generate billions of vatu from passport sales, how can we be assured that we’re attracting the right applicants? By all accounts the Hong Kong operations of the VERP were low-volume, painstakingly thorough and above-board.

Harvey Law, the managing partners of the VIC, appear to have been operating internationally since the early ‘90s. They list numerous staff in multiple offices and do not appear to be associated in any way with the more notorious practices sometimes associated with expatriated wealth.

Geoffrey Bond does not appear in the Harvey Law page listing ‘our team’. He does appear in numerous photographs standing with Bastien Trelcat, Harvey Law’s Southeast Asia Managing Partner, and MP Andrew Napuat, who is Parliamentary Secretary for Provincial Affairs, along with several other people.

Mr Napuat headed a delegation of MPs who travelled to Thailand to conduct the official appointment of Harvey Law Group as passport sales agent. He was later confronted in social media with the assertion that “one of the key players in this scenario has a past history of holding himself out to be things he isn’t.”

A link was provided, a rather salacious exposé peripherally implicating Mr Bond in a series of high-rolling activities and suggesting he advocated a life of hedonism.

Mr Napuat responded by questioning the source: “I am surprised you are linked to Andrew Drummond who has been jailed in Thailand and has arrest warrants for defamatory articles on people.”

Andrew Drummond is a UK-born journalist who lived for 25 years in Thailand. He is known to members of the Vanuatu journalism community.

The Daily Post asked Mr Drummond about the criminal defamation charges. He acknowledged that he had been charged with several counts by two people. Both of those people were subsequently convicted, one for extortion and one for fraud, he said, and both had fled the country with their appeals still pending.

Only one defamation charge ever made it to trial, he told this newspaper, and the conviction was for his failure to remove a user comment stating that a person was a pimp from his blog. The person in question was indeed proven to be the owner of an Australian brothel, but truth is not an absolute defence against defamation in Thailand.

Journalists have often been the target of criminal defamation cases in Thailand. The Guardian reported that Mr Drummond left Thailand in 2015, citing fears for the safety of himself and his family. He had been investigating illegal ‘boiler room’ trading activities and their alleged links to Bangkok’s burgeoning sex industry.

The article quoted Mr Drummond saying, “Thailand’s inability to take criticism, and its greatly flawed justice system, are major handicaps to its progress”.

The question here is not one of legality, of who did what when. The question is whether, all things considered, the people of Vanuatu feel that ‘Lord’ Geoffrey Bond is the best possible candidate to act as the face of Vanuatu to the rest of the world?

Mr Napuat’s party leader, Ralph Regenvanu, pleads ignorance about the man’s character and standing. “We dealt with him in good faith on the basis of his status as Honorary Consul for Vanuatu.” The Graon mo Jastis party has always campaigned on an anti-corruption platform.

Mr Bond has indeed been chosen by Foreign Affairs as consul, but he has yet to be formally recognised by authorities.

Asked about the Bangkok junket, Mr Regenvanu stated that his party member was delegated by the Prime Minister to head the group with just two days’ notice.

The Daily Post will continue its investigation in the coming days