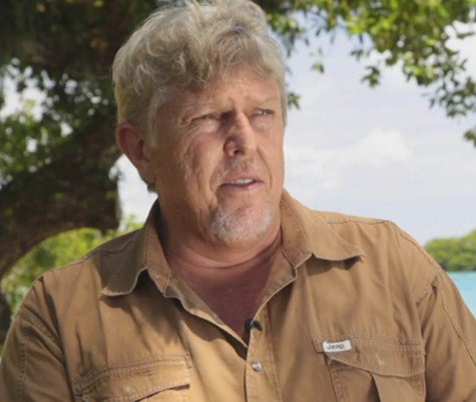 Bradley Wood, Chairman of the

Association for the WWII Museum

Bradley Wood, Chairman of the

Association for the WWII Museum

An association that was established in Luganville, Santo, with a vision to set up the South Pacific World War II Museum in the Northern Town of the Republic of Vanuatu

, has this week launched the first volume of its newsletter called ‘Untold Story Unfold’.

Volume No.1 of the South Pacific WWII Museum newsletter carries articles on the plans of the envisioned museum along with articles and photographs of World War II relics that includes WWII aircrafts, WWII relics, photos taken during WWII including the President Coolidge, Captain Elwood J Euart Memorial and much more that no one has ever thought would one day be uncovered and retold through the museum for viewing by locals and visitors from around the world.

The place to see all these is at the South Pacific WWII Museum in Luganville Santo, the base that was occupied by over 200,000 US Marines during World War II.

In the first volume newsletter of the South Pacific WWII Museum, the Chairman of the Association and the man behind the project, Bradley Wood, said in his launching remarks that: “We acknowledge and thank those who share in what we envisioned and have supported through donations thus far to what we’ve achieved.

“There remains a lot more to get done and we are hopeful that many more will contribute towards development of this exciting project,” the project Chairman Bradley Wood announced.

Volume 1 of the WWII newsletter featured an impressive artist’s impressions of the museum from different perspective and how it will finally appear when fully built and ready to receive visitors outside and inside the museum.

The information carried in the Volume No.1 of the South Pacific WWII Museum newsletter, reveals information about development on Espiritu Santo, Vanuatu (New Hebrides during WWII) Museum.

A charity foundation, Elwood J Euart Association, was created in order to attract awareness and enable individuals from the public to donate any artifacts and donations to the museum.

It is named after Captain Elwood Joseph Euart who died at the sinking of the SS President Coolidge after saving his comrades from the sinking ship.

The self-funded foundation requires donations from wider community to enable the project to be successful, the article in the first volume 1 of the news letter stated.

As for the concept plans, Arkitektika, a professional and internationally recognized architectural and designing company developed the conceptual plans and designs for the South Pacific World War II Museum with the objective to construct a signature building icon for Luganville, conforming to world class museum and building standards. The building shape and form will resemble the Quonset huts widely built during WW2, and can still be seen around Santo today, part of the article in Volume 1 of the newsletter revealed.

The museum site lease has already been completed on 20th May 2016 by the Minister of Lands, Ralph Regenvanu, following the approval by the Council of Ministers in 2015.

The site is located at Unity Park in the centre of Luganville town.