You are the owner of this article.
Edit Article Add New Article
You have permission to edit this article.
Edit
Home
News
Business News
Opinion
Sports
Tourism
Jobs
Real Estate
Classifieds
Advertise With Us
1 of 2

Overall, tax revenues are about 10% higher than they were in 2017, but with the VAT rise, that number should be much higher. 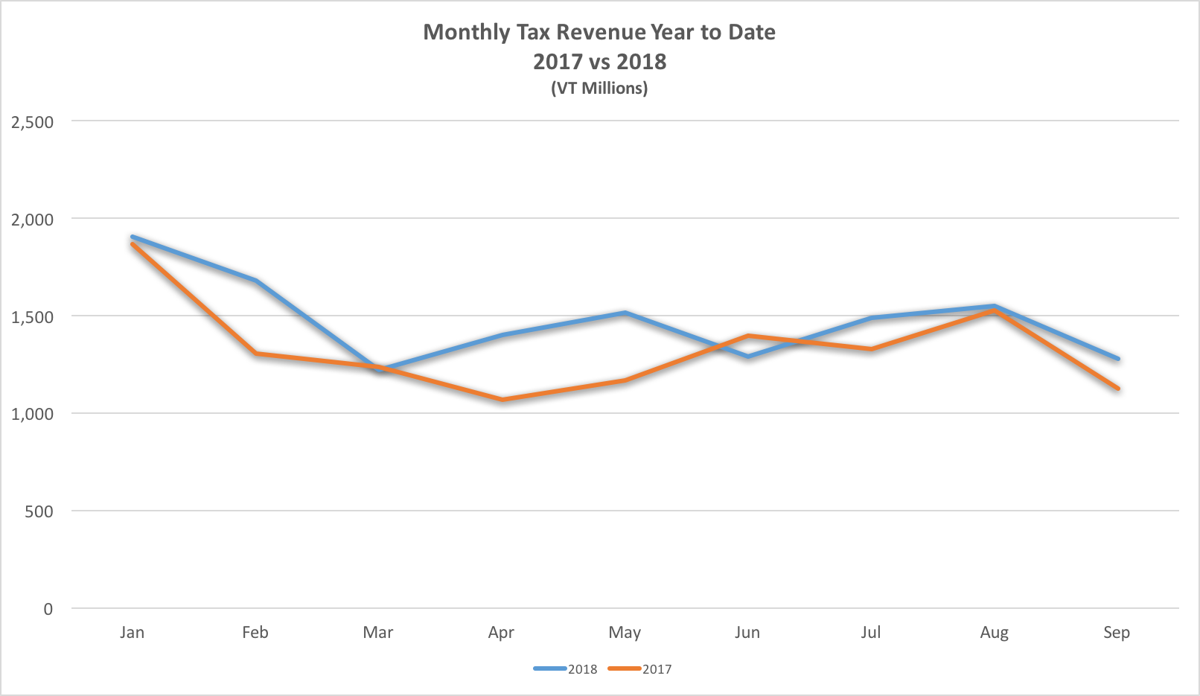 Despite occasionally surging ahead of last year’s revenues, monthly tax income doesn’t look a lot better than it did in 2017. The government is taking a larger slice, but the pie isn’t growing.

Overall, tax revenues are about 10% higher than they were in 2017, but with the VAT rise, that number should be much higher.

Despite occasionally surging ahead of last year’s revenues, monthly tax income doesn’t look a lot better than it did in 2017. The government is taking a larger slice, but the pie isn’t growing.

There is mounting evidence that Vanuatu’s economy is slowing and could even be shrinking.

It’s difficult to get a clear and up-to-the-minute picture of the nation’s economy, but what information we do have provides cause for concern.

The Department of Finance and Treasury recently issued its September financial report, covering government spending and revenue through the first three quarters of the year.

On the face of it, things look good. Revenues over the first nine months of 2018 are about 20% higher than the same period in 2017. But once you start digging into the details, it quickly becomes clear that the fundamentals are not healthy.

The vast majority of new money is coming from passport sales. The Daily Post estimates that passport-related revenues will pass VT 9 billion by the end of the year. That’s nearly a third of all government income for 2018. It’s a lot of money, but it would be foolish to rely on it. The bonanza almost certainly won’t last. All year long, non-tax income has trended steadily downward.

The VAT is the single largest source of income for the government. Because the VAT applies to nearly all goods and services, you can get an idea of the amount of overall activity by watching how much money the government gathers in tax.

Rises in VAT collection always lag behind increases for a number of reasons. It often takes 18-24 months for the full impact to be felt.

And a 20% increase doesn’t mean that revenues will jump by the same amount. Things cost more, and people don’t necessarily have more money to spend, so they buy less. So even though the government gets more of your money, it doesn’t mean there’s more money to go around.

The year began roughly as expected, with monthly VAT income trending at about 15% over last year. But since mid-year, revenues have sagged, and briefly dropped below 2017 levels. The trend line for the first three quarters of this year ended up less than 10% above 2017.

This means that, according to VAT returns at least, there was less actual buying and selling going on than last year.

Another key economic indicator is the lending market. When people are optimistic and active in business, they borrow more. When they’re cautious or pessimistic, they borrow less.

In the second quarter of 2018, borrowing was flat across the entire sector.

Business owners and bankers agree that many people are taking a wait-and-see approach to new business opportunities.

With good reason, business people are still smarting from the bite of a VAT rise. And they live under the looming shadow of a potential income tax. Add to that a number of other regulatory and investment-related reforms being rushed out rather than patiently implemented. The result is an increasing number of business owners and potential investors who consider it wiser to see how things turn out rather than simply hoping for the best.

One finance expert told the Daily Post, “The government has made its investment in infrastructure, and they’ve told us that now it’s up to the private sector to drive growth. The banks are ready. They’ve got a lot of money ready to lend. But people don’t have a lot of confidence right now. People seem to be taking a wait-and-see approach.”

On paper, he said, economic growth seems modest, but positive. The Asian Development Bank has it floating between 3% and 3.5% since 2016. But this is deceptive, the finance expert told the Daily Post. Large-scale infrastructure projects inflate the number without actually keeping the money in the economy.

“Much of the money flows straight back out again.”

Publicly, at least, the Prime Minister seems content with the statist approach his government has taken to the economy. In his rebuttal of the failed no confidence motion yesterday, he defended his administration’s record spending and interventionist policies.

But with private sector confidence slumping, and passport revenues trending downward, there is diminishing room for complacence. Unless there is significant stimulus in tourism, investment and small business, the outlook for all of 2019 will be gloomy.

The Vanuatu Chamber of Commerce and Industry is calling for a more strategic approach. Newly elected president Shaun Gilchrist stated, “we have the National Sustainable Development Plan 2016-2030, a good national strategic plan for Vanuatu. But there is no specific National Economy Development Policy which outlines the priority actions” for relevant ministries.

Ministers often tend to work within their own silo “on their own priority actions and result targets.”

“There is a need to innovate and develop a new effective and efficient Public Private Partnership (PPP) system and framework in Vanuatu,” he stated.

The Chamber’s plan is to get back onto the front foot in terms of its engagement with the government. He underlined that it would be a team effort.

“The Vanuatu Government will have the ownership of the development and implementation of the National Economy Development Policy and its related economy strategic plan, to be shared and coordinated effectively and efficiently between the relevant ministries and the VCCI, Employers and Entrepreneurs of Vanuatu.”