You have permission to edit this article.
Edit
Home
News
Business News
Opinion
Sports
Tourism
Jobs
Real Estate
Classifieds
Advertise With Us
1 of 3 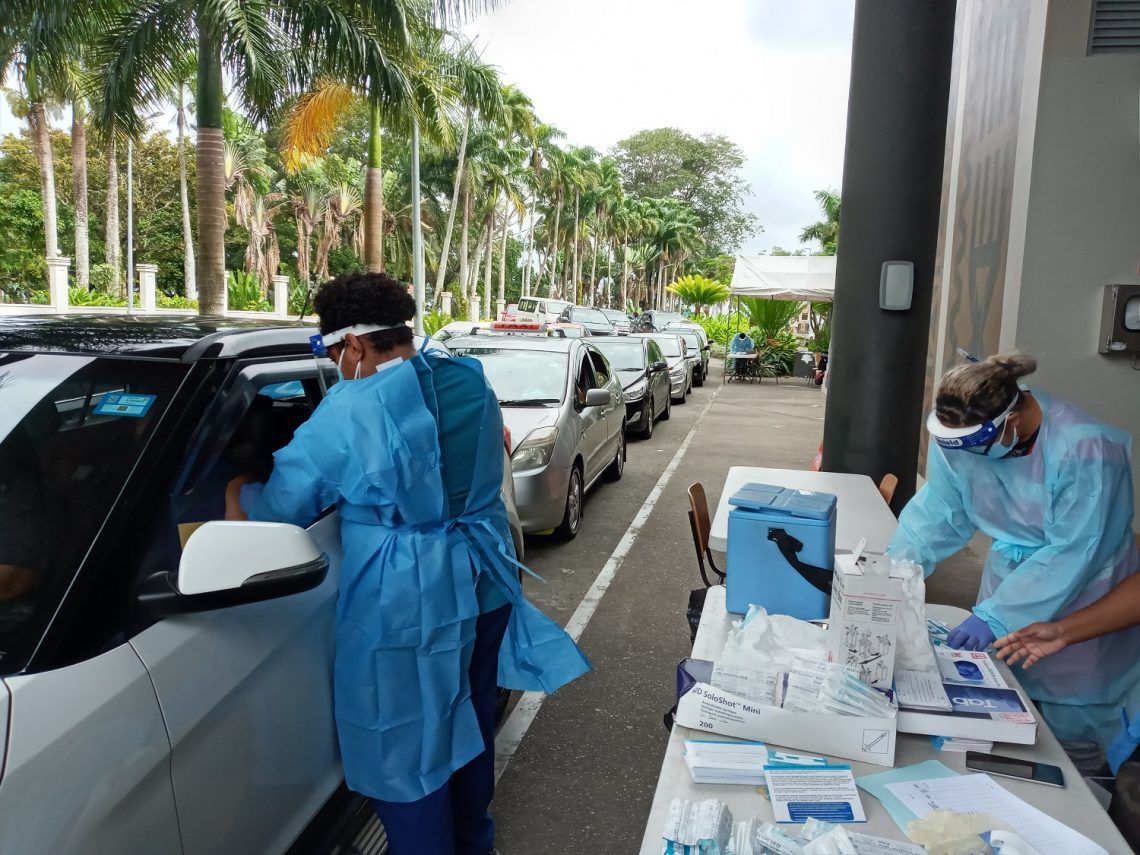 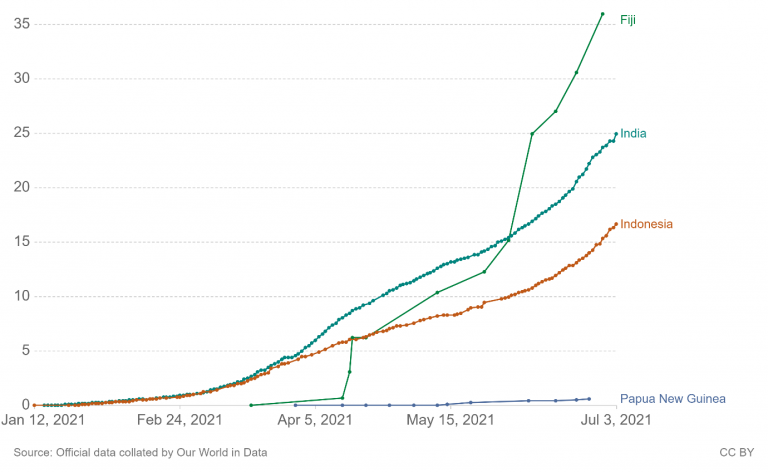 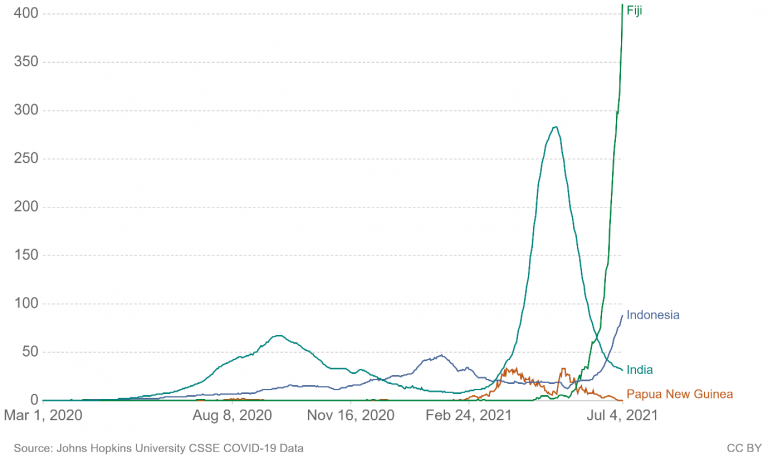 Both Fiji and Papua New Guinea (PNG), the Pacific’s two most populous nations, have suffered from the indirect, economic impact of the COVID-19 pandemic over the last year or so. This year was meant to bring hope. But in the last couple of weeks, things have got a lot worse in both countries, albeit in very different ways.

In Fiji, the pandemic is out of control. The figure below shows the 7-day moving average of new cases normalised for population size. Relative to their populations, the number of new cases in Fiji is above the maximum reached by India at the peak of its recent outbreak, and is well above the number currently seen in Indonesia. In fact, according to Our World in Data (5 July), Fiji has the eighth highest per capita average of new cases in the world. Already there are stories of hospitals being full, and worries that the country will run out of oxygen.

PNG is doing much better to control its outbreak. Although we know that PNG is under-testing, the official number of cases has gone down, and it is widely reported that hospitalisations are down as well.

PNG’s crisis is rather in relation to isolation and vaccination. Again, according to Our World in Data (5 July), the country has the seventh lowest vaccination rate in the world, and the lowest outside of Africa. The ratio of vaccines administered to the population is only 0.57 per 100 people; the next lowest, outside of Africa, is Afghanistan at 2.28 per 100 people. Within Africa, only Chad, Democratic Republic of Congo, Burkina Faso, Benin, South Sudan and Cameroon have lower vaccination rates.

By contrast, as you can see from the figure above, vaccination is Fiji’s hope. While PNG is administering about 1,000 vaccines a day (which is not much more than the absolute daily growth in population, about 630 a day), Fiji, with a population about one-eighth the size, has pushed its daily vaccination rate up to 6,000. It now has a ratio of vaccines to population of 35%. This is not great by global standards: Fiji sits just outside the top 100 countries by this measure. Still, while there is some vaccine hesitancy, at least the vaccination rate is rising quickly.

Eventually, even if preventative measures fail to quell the outbreak, a rising vaccination rate will do the job – but only after the country has endured an enormous amount of suffering. (The Seychelles presents a sobering vision of what may lie ahead for Fiji before the situation improves. Despite its almost universal vaccination rates, the Seychelles continues to have the highest number of new cases on a per capita basis in the world.)

PNG is facing pain of a different kind. The highly contagious Delta variant, which sparked Fiji’s untamed outbreak, is yet to make an appearance in PNG, at least an official one, but for how long? Authorities recently turned away a chartered flight from India, and have tightened arrival rules – for example, by increasing the quarantine period to 21 days. These measures might be justified to keep the variant out of the community, but will cause further economic isolation and suffering, and will have to be sustained indefinitely if vaccination rates don’t pick up.

And there is just no sign of that happening. One survey found that, excluding health workers, only 39% were willing to be administered a COVID-19 vaccine. Another survey of university students showed that a mere 6% wanted the vaccine. Conspiracy theories abound. Any politician who speaks out in favour of vaccination has to weigh up the unpopularity of the message they are sending. PNG’s opposition leader has called for the vaccine rollout to be suspended. Then there is the fact that PNG is the second least urbanised country in the world – which makes the vaccination task all the more daunting.

For Fiji, much suffering (medical, economic and social) is already being endured, and much more lies ahead. But there is at least a path ahead out of the crisis for Fiji if it can continue pushing up the vaccination rate. PNG, on the other hand, looks destined to be one of the very last countries to emerge from isolation. And, without mass vaccination, there is always the chance – perhaps the likelihood – that the Delta or some other variant will, however tight the isolation measures put in place, eventually take hold and bring to PNG the sort of spike in cases that Fiji is now seeing.

Fiji’s COVID pain is currently more intense than PNG’s, but the latter’s prospects are, if anything, even more worrying.

Note: Data downloaded from Our World in Data on 5 July 2021. The Fijian Ministry has an excellent website with the latest COVID-19 data.

Disclosure: This research was undertaken with support from the Pacific Research Program, funded by the Department of Foreign Affairs and Trade. The views are those of the author only.

This article appeared first on Devpolicy Blog (devpolicy.org), from the Development Policy Centre at The Australian National University.

Stephen Howes is the Director of the Development Policy Centre and a Professor of Economics at the Crawford School.