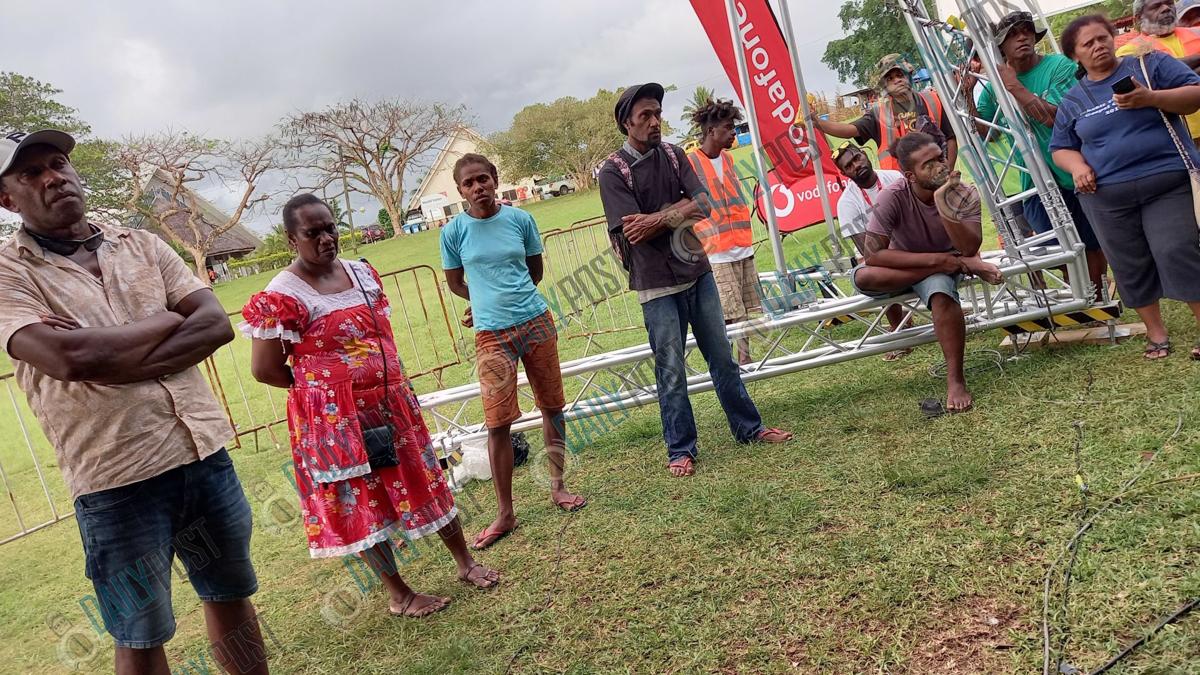 Some of the frustrated stall owners 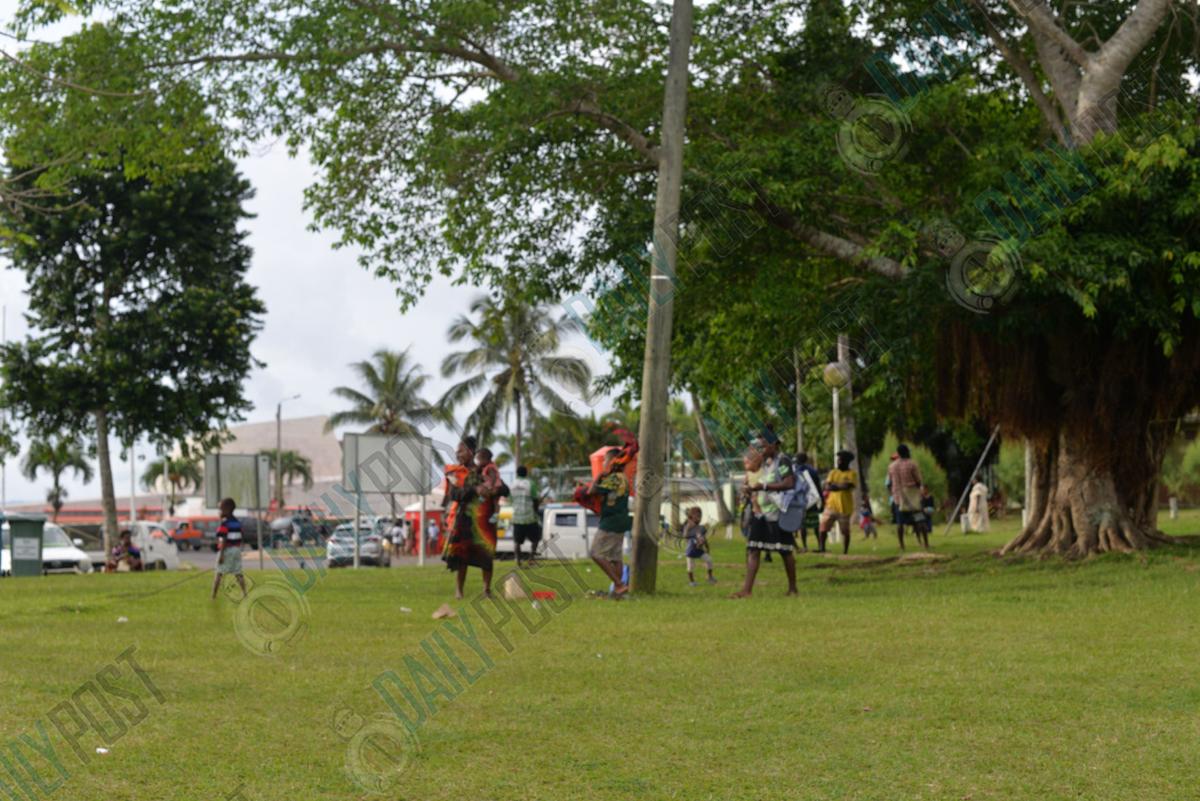 Members of the public about to leave the area, after the announcement was made 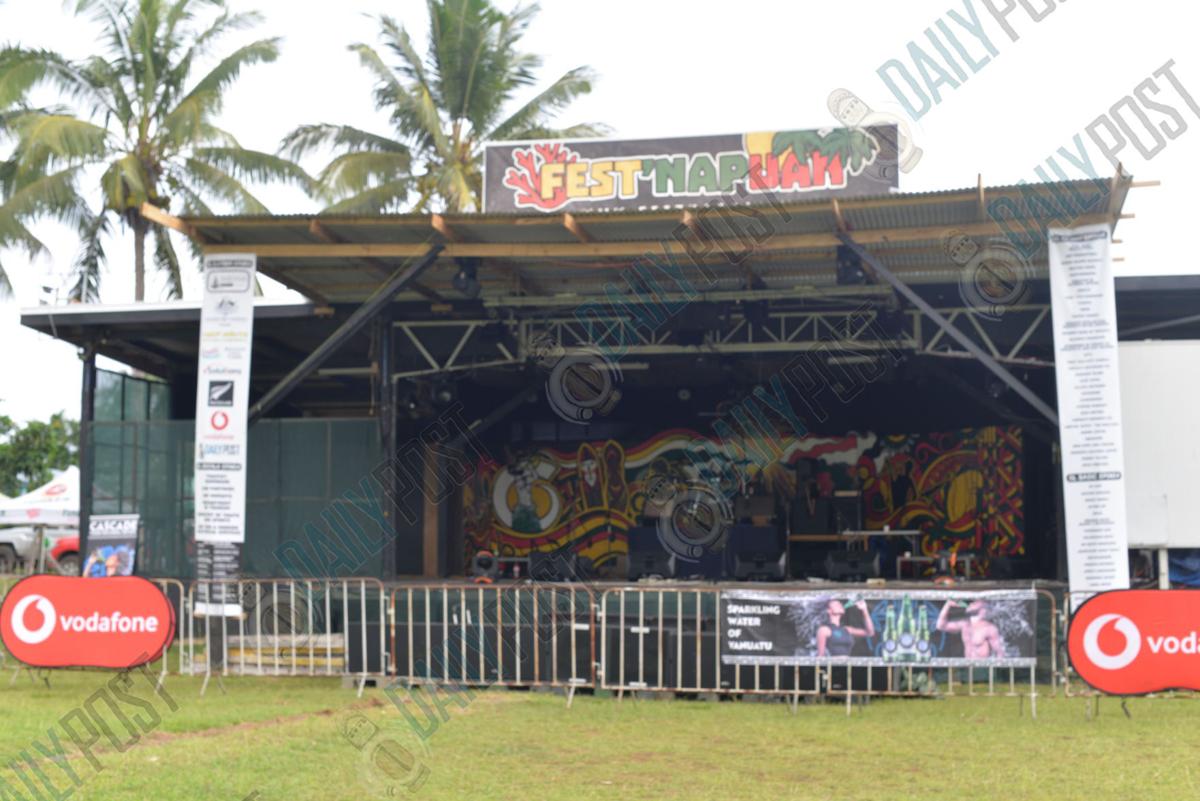 An empty stage some minutes after the announcement 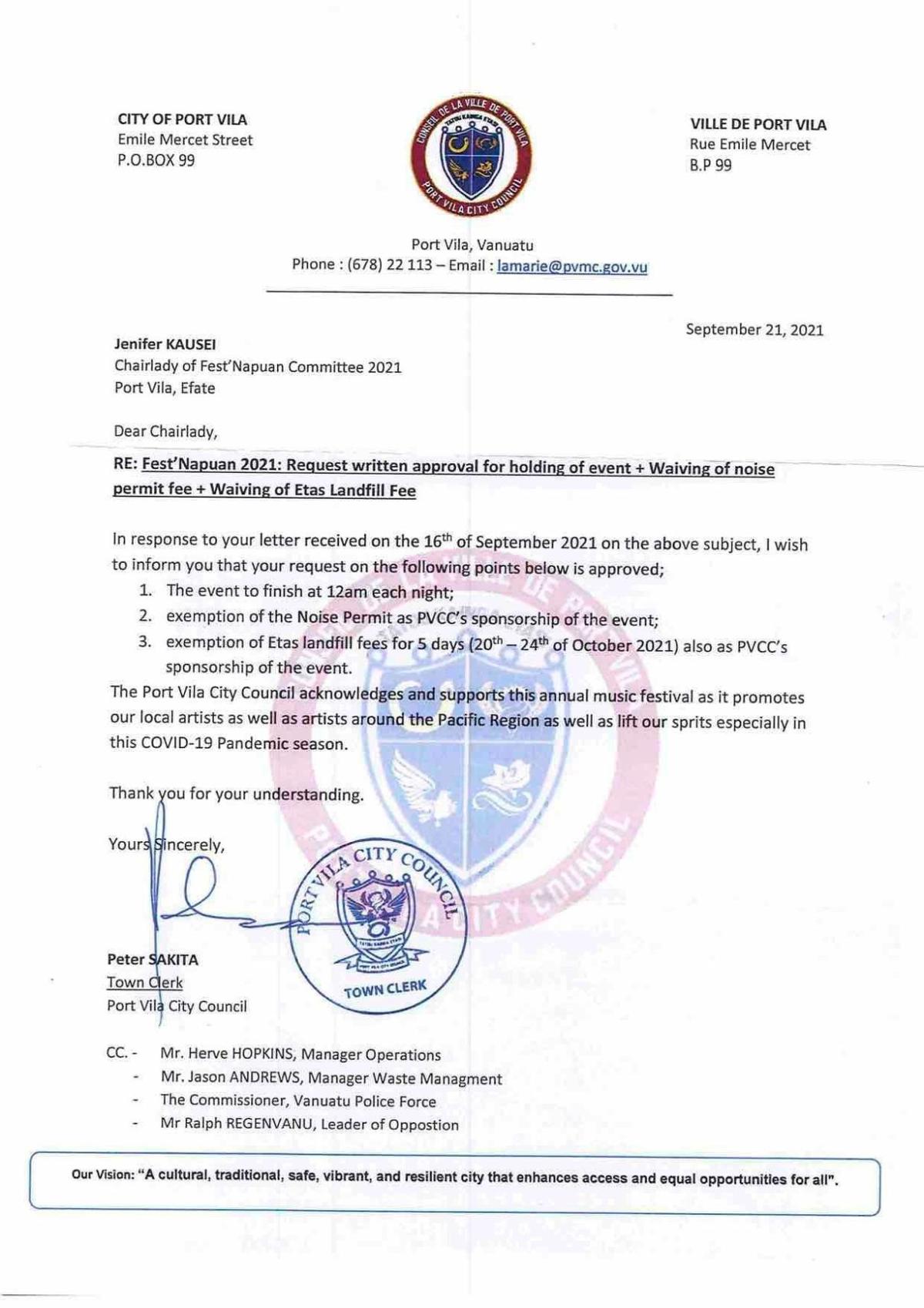 A letter of approval for the event to take place, issued by the Town Clerk of Port Vila City Council. Photo: Fest’Napuan Facebook Page

Some of the frustrated stall owners

Members of the public about to leave the area, after the announcement was made

An empty stage some minutes after the announcement

A letter of approval for the event to take place, issued by the Town Clerk of Port Vila City Council. Photo: Fest’Napuan Facebook Page

The DPM made the Order in compliance with the Public Order Act [CAP84] which states, “For the interest of public safety and the maintenance of public order, the holding of procession or assembly at Saralana area for Fest’Napuan is prohibited.”

Further to the Order, a letter was also addressed to the Chairlady of the music festival, Ms Jennifer Kausei.

The letter read, “You are kindly informed that section 8(1) of the Public Order Act [CAP84] provides that any assembly such as the above music festival has to be granted permission by the Minister of Internal Affairs.

“I am aware that no permit has being granted to allow for such event to take place and therefore, considered an offence under Section 11 (c) of this Act.

“Given the current COVID-19 cases in Port Vila and subsequent advice from the Minister of Health today, I am instructing that this music festival is ceased immediately and postponed to a later date in the interest of public safety in accordance to Section 9(a) of this Act.”

Yesterday afternoon, at around 4:30, Mike Esrom, a member of the Fest’Napuan organising committee read out the letter from the DPM, as well as the Order, to the members of the public who were present at Saralana area.

Members of the public were asked to disperse from the area to avoid police intervention.

Meanwhile, a number of stall owners expressed their disappointment over the short notice. In a brief meeting with the Chairlady Kausei, and members of the committee, the stall owners confirmed they had incurred loss over the two days.

They claimed that some of them have even shipped local food from the islands just for the event. Food and kava were not sold as expected.

The stall owners demanded they get compensated for the loss they incurred over the two days.

In response, Ms Kausei said the situation is beyond their capacities as committee members of the event. As she sympathised with the stall owners on behalf of the committee, she admitted that they also incurred loss over the two days.

She assured the stall vendors that the committee will try its best to liaise with the government and get back to the stall owners in due course.

Kausei also confirmed they sought a permit from the Port Vila City Council, a practice that they have been doing over the past years. She asked of the stall vendors to remain patient with the committee as they work to their issues.

If it is essential to sort out the permit as per the Order, the committee will make it a priority to work on it today.

There will be more negotiations that the committee will need to have with the government to address the compensation requests for the stall vendors.

Initially, the festival was scheduled to take place last week. The authorities, however requested the committee to postpone the event. The committee chairlady said they wished the government had consulted them prior to making the decision.